you have slowly come to terms with how the skywalk curves into your clavicle when the last songs on my i-pod loses its record into the unsynchronized stuttering of a crowd.

this day has become schizophrenic, and more paranoid than the country weeks during world war II; but you trace the back alleys of a dead city, where grief is dragged like a prostitute and sold into a brothel of hand-me-down memories.

there is a road crawling down the planes of your shoulder blades and curling into the ridges of your spine before valleying into your ribs. i have walked that road with half a lung full of cigarette ashes and a palm desperately pretending to read braille, as if scars tended to be the best poets, who wrote in a language the literate could never apprehend.

yesterday, i had spent three hours talking to gods who couldn’t seem to remember my name. maybe we spoke of you in hushed tongues, or maybe i just kept arguing with that part of my brain that is beginning to understand you more than my heart ever did.

there is a lie lying between your fingers and mine, when i reach for the sun as it goes down and you stretch for that fraction of sea that has never seen light. it’s the same lie the birds have taken to whisper and die trying to finish when the air thickens, and the next breath comes like a 4 am nightmare- you just can’t recall.

3 thoughts on “accepting grief, and its falsities.”

and so you say.. Cancel reply

Who spilled the ink? 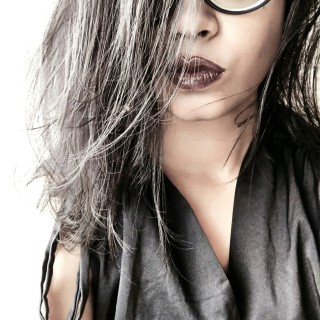 i'm half a moon & half a black-hole. i don't ink love, i bleed longing.

something else to read.